The Italian Renaissance brought us many great artists as well as great discoveries. It was a time of “re-birth” following the dark ages. There were advances to art through Michelangelo, Da Vinci, and more. We also saw science take a big leave through Galileo, Descartes, and Copernicus. People’s ideas about the world began to change and people explored more than ever. The black death left populations decimated but also gave people a different kind of wealth where they could afford to commission art to fit their desires. This led to the arts working in guilds to build up their skills. The renaissance took place between 1350 and 1650’s. It was an exciting time and we still look to the discoveries and advances as shining examples of human perseverance today.

Leonardo Da Vinci is one of the great masters of the Renaissance. Leonardo was born in 1452. Near Florence which was the center for the renaissance at the time. He is best known for his painting called the Mona Lisa, The Last Supper, and the drawing of he called the Vetruvian Man. He was a true renaissance man in the notion that he explored art, music, science and technology. Leonardo Da Vinci had very little formal education but was extremely inquisitive and had an extreme attention to detail that he demonstrated in his scientific drawings of human bodies, animals and the flow of water and air. 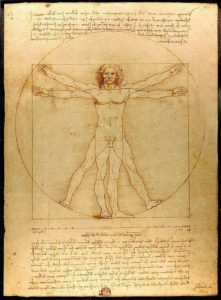 The drawing of the Vetruvian Man is one of the first examples of an artist using proportion to make sure the body was drawn accurately.Da vinci’s attention to detail was evident in the way he drew one subject from many angles and tried to get every detail perfect. Leonardo Da Vinci learned a great deal about classical proportions from studying Greek and Roman art and architecture where having the perfect balance and proportion was an ideal of perfection. He paid extra attention to folds in clothing, the foreshortening of a hand and the angles of movement that were natural. He also showed emotions very successfully in his paintings and drawings. Giving his subjects a calm but expressive demeanor. 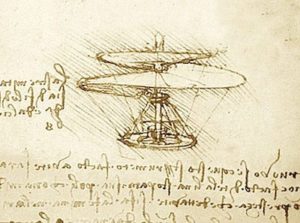 Leonardo Da Vinci invented many machines that were well before their time like a parachute, helicopter, among other flying machines. He used designs from nature like a birds wings or the spiral of a snail shell to help create lift in his flying machines.

There is a great deal to discuss with each individual work of art done by Leonardo Da Vinci and why each painting was considered genius for its time as well as today. please watch this video discussing the Last Supper painting in Milan by the Khan academy. This is a wonderful explanation of the history and the possible meaning of the way the people are placed, the perspective used and the integration of math and science in his work. This video does a fabulous job of explaining why this work is so revered today and why it is such a wonderful example of Renaissance art.

Please follow the link below for some drawing tutorials to help us learn to draw in the style of Leonardo Da Vinci.


No discussion of Leonard Da Vinci would be complete without mention of his most famous work, the Mona Lisa. There is a great deal of speculation about the meaning behind this masterpiece. Th video below discusses just the tip of the iceberg when it comes to possible hidden meanings and what Leonardo’s true intent was with this painting. It has been long discussed that Leonardo Da Vinci never felt like he finished this painting and was continually retouched by Leonardo. This painting was carried with him until his death. So watch this video and let’s hear what you think about this mysterious lady and her beautiful painting. 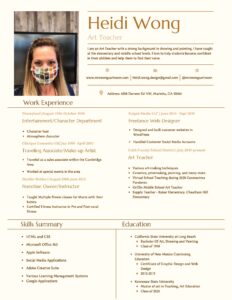